I've been dealing with episodic dizziness for a few years. The latest one has changed things up quite a bit.

I wrote about my first bout with vertigo almost 3 years ago. I had a bad middle ear infection back then which gave me room-spinning dizziness and loss of balance. I was fine for over a year but in June of 2020 I woke up to the same symptoms. I didn't even have an ear infection with this episode. I was taken to my local urgent care and received the same treatment: anti-nausea and anti-dizziness meds. I was sent home and took 2 days to get over it.

I was, however, referred to an otolaryngologist (an ENT - ear, nose, throat doctor) and saw her at the beginning of August. Hearing tests (audiogram) showed I had some conductive hearing loss in my right ear and confirmed the tinnitus that I've had for about a year and a half. The doctor said that now that I was an established patient, that if I experience another vertigo episode, I could call and probably get a same-day appointment which would be helpful in determining what's going on while it's happening. 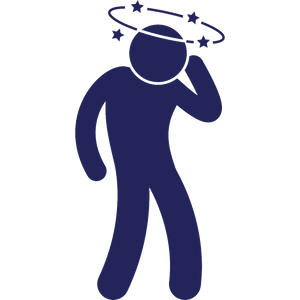 In early December of last year, I had another episode of vertigo and dizziness. Same type of thing - couldn't walk without stumbling, stand without falling, sit up in bed without flopping. Even more annoyingly, my neck pain from a couple years ago was making a comeback. The vertigo itself lasted for 3 days again and of course started on a Saturday, but I was able to see my ENT on the following Monday.

Audiogram this time showed that I had perfect hearing again (the right ear hearing loss was gone). Tinnitus of course was still present. She examined my eyes looking for nystagmus (rapid involuntary side-to-side eye movement), checked my eye tracking, and performed the Dix-Hallpike test which looked negative to her meaning I didn't have BPPV (benign paroxysmal positional vertigo). She asked me if I had a history of migraines which I do, and even this time I felt I had a migraine during this episode. With this information, she suspected that I had a vestibular migraine which is a migraine that may or may not include an actual headache but certainly can involve vertigo among its symptoms. Out of the 14% of the population that have migraines, 1% of those people have migraine associated vertigo - and of them more women are affected than men. There is no test for diagnosing vestibular migraine but she referred me to a hearing and balance center to have some tests done to rule out other causes.

So later that week, I had a VNG (videonystagmography) done. This involved a series of tests wearing special goggles to record my eyes as I track dots and movement while laying in different positions. One of the tests is called a caloric test, where cold & warm air/water is pumped into my ears one at a time to see how my eyes react (checking for nystagmus). Normal results would create the sensation of vertigo as the test stimulates the acoustic nerve.

All of my tests showed normal response except for the caloric test which showed an abnormal response, specifically bilateral vestibular hypofunction. During my caloric test, I did not experience any vertigo or nystagmus. So with that, my ENT ordered an MRI to be done of my brain and ears to rule out other (and more serious causes).

A few days after the VNG, I had a dentist appointment and I experienced another dizziness episode after 20 minutes of laying back in the chair which was tilted downwards. Although it persisted throughout the procedure, I just wanted to get through the visit so I stuck it out. I couldn't walk let alone drive myself home so my wife had to pick me up (and retrieve my car later). The dizziness waned about an hour after I got home but I felt overall off-balance as I did before.

I had the MRI done and those results luckily showed up, as doctors say, unremarkable. Still on the heels of the possible bilateral vestibular hypofunction diagnosis, I was then suggested to start vestibular rehabilitation - a form of physical therapy that focuses on balance and recalibrating my brain to raise my threshold of getting dizzy. My ENT also got me a referral to an otoneurologist at the Ohio State University Wexner Medical Center who specializes in vestibular diseases & conditions.

I started my physical therapy this past January and continued through to middle of February. This involved exercises with eye movement, balancing (or at least attempting) on a pivoting platform, standing/stepping on a software surface, motion tracking, and walking with hand motion. The therapist said I was making improvement but it was hard for me to see that as I didn't feel like I was. Throughout February I was feeling especially bad as I was nauseous 24/7 while being upright and moving making it worse. Needless to say with 2 weeks of this, I wasn't able to get through a 30 minute session of physical therapy.

I traveled to the other side of Columbus for this testing, which included the use of a rotary chair as well as the other vestibular tests done before (Head Impulse Test, caloric, etc). It was an interesting experience, being strapped into the chair and spinning so fast but in complete darkness. I was almost feeling a bit sick to my stomach at times but overall not so bad. The caloric test this time was done with water which felt similar to when I had my ears cleared of impacted cerumen (ear wax).

I waited for about a week before contacting them about the results which I received shortly after. The doctor noted that all of my testing was normal, showing no evidence of bilateral vestibular weakness. I suspect the reason that the first caloric test was abnormal was that: a.) it was done using air which is less sensitive than using water and b.) the air didn't quite make direct contact inside my ears as it's been pointed out to me that my ear canals go sharply upwards while normally they would go slightly upwards before turning back toward my inner ear. So this would cause the acoustic nerves to not register much of anything. My total response was still kind of low but high enough to say it's not a bilateral weakness. The original caloric testing should have been redone to confirm the abnormality.

He did, however, suggest what my ENT had suspected at first, that I am suffering from vestibular migraines which lead to developing PPPD (persistent postural-perceptual dizziness). The migraines are the episodic "attacks" that leave me unable to function for a few days at a time. The PPPD is a chronic condition of ongoing dizziness symptoms and non-spinning vertigo that is initially caused by a vestibular disorder or disturbance such as the vestibular migraines.

What happens here is that during a vestibular crisis, the brain goes into a high-alert mode trying to overcompensate and fix the issues with dizziness & balance. And when a person gets better, the proper thing is for the brain to get out of this crisis-mode but this time it did not for me. My brain is on constant high alert that I might fall or stumble. It says hyper-vigilant with excessive self-monitoring of motion and continues with over reliance on vision for balance when it could just trust the vestibular (inner ear) and proprioception (signals from legs & feet) systems that I'm not in danger. Essentially communication between my vestibular system and brain is not working correctly. 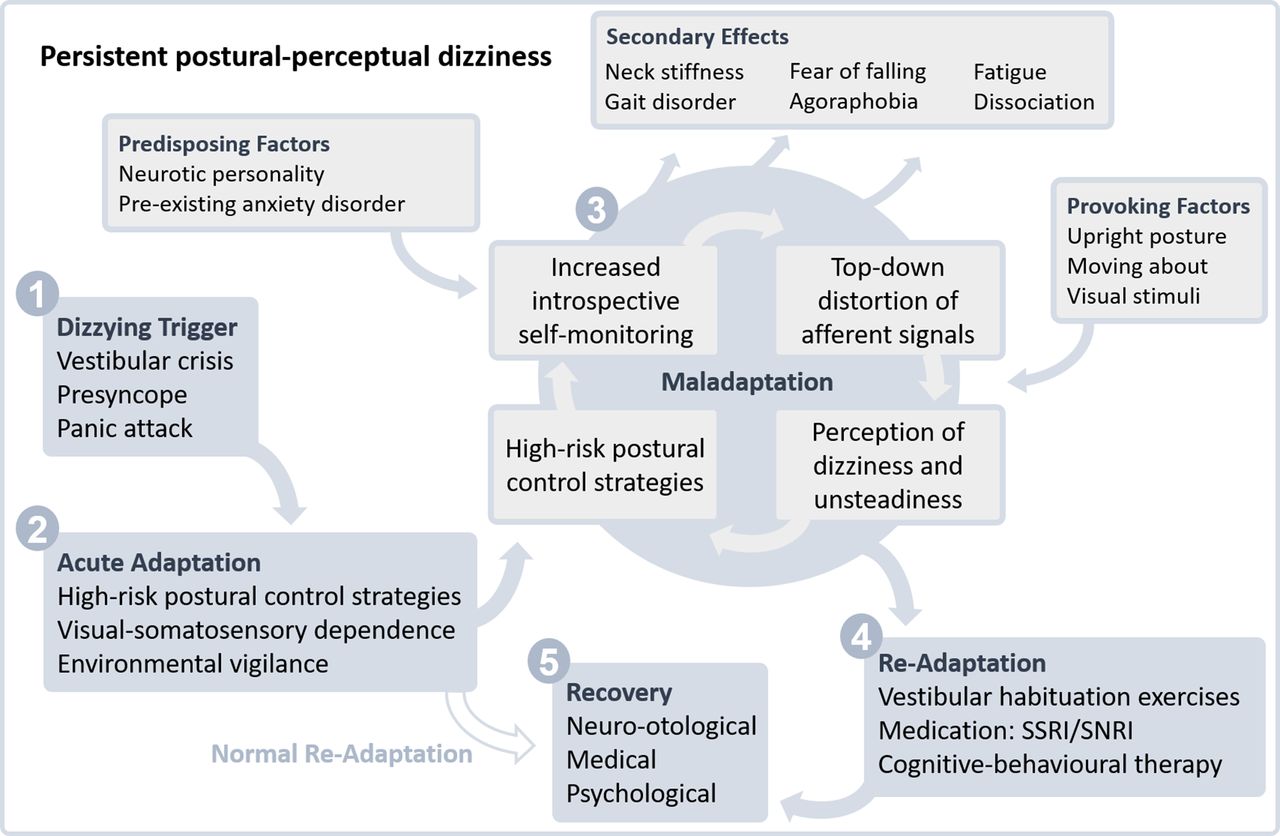 This in turn creates a perpetuating loop of:

It can sound like this condition is "all in my head" and I should just not worry and just do things normally. But these symptoms are very real and not easy to just "get over":

And all this is excerbated by anxiety and sudden motion (active or passive) and generally worse when I cannot control the motion. Even sitting upright can make me feel worse as well as "busy" environments e.g. crowds, patterned carpets, and contrasting products in store aisles.

And the symptoms can wax and wane, lasting for an extended period of time or not show up again after a few days - this makes it annoyingly unpredictable.

Now combines those with the symptoms of a vestibular migraine episode: 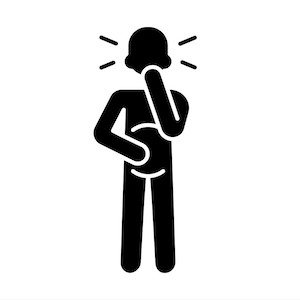 So far I have been feeling miserable most of the time with only a few "good days." The brain fog has hit me in the middle of most afternoons and by evening I cannot focus on anything. I feel that the things that I enjoy are being taken away from me or that I cannot do activities as well as I could before all this.

What am I doing about it?

I'm working on figuring out my triggers for both the vestibuar migraines and PPPD. I definitely know (and have known for a long time) that aspartame (and any other artificial sweetener) gives me a migraine, which is disparaging since I wanted to cut out some sugar in my diet. I am limiting myself on sugary drinks and caffeine each day though. I was given a list of common migraine triggering foods and I cannot believe how much is on there. I know I don't need to cut them all out of my life - I just need to see which are problematic.

I'm now seeing a neurologist at Ohio State and we're trying medication out. I'm hoping for the best and will see how this plays out. He (and my ENT) did say if I don't feel the physical therapy is working to stop going. I do think I need to have some sort of vestibular rehabilitation but I will research some more and find something that will work for me. I think habituation and getting myself out doing things will help (without overdoing it and making me miserable). Plus hoping another major migraine attack doesn't just reset my progress.

I was worried that this will limit me with band camp (for my son's marching band) this summer and the upcoming marching season. However I'm not going to back down on volunteering and will do what I can as I've always have. I know I felt bad about not being able to be in the concession stand for this past basketball season but the tight quarters would not have done me any good.

I've joined a few subreddits regarding dizziness, vestibular migraines, and PPPD and I am going to start interacting with others with the same issues I'm facing.

I think I can get the vestibular migraine under control eventually and limit those episodes. I'm not sure if I'll ever get rid of the PPPD, from what I've read so far. I'm doing my due diligence and researching/reading more about it for a better understanding though.