Object-oriented programming can be a complex paradigm to learn for a beginner. I will try to explain how some of it works. In this article, we'll cover creating generic methods and classes.

What is a Generic?

Generics in OOP allow us to define a specification of a class or method that can be used with any data type. When we design a generic, the data types of the method parameters or class isn't known - not until it is called or instantiated.

A generic class or method can be defined using angle brackets < > and an identifier. The standard identifier used for generics is a capital letter T i.e. <T> but any letter can be used - even a word. If it makes sense to use an identifier other than T, feel free. It's not a rule, just a guideline that most programmers follow.

We can also use multiple generic types if needed, typically the second one is denoted as <U>.

See the below example of an overloaded method that swaps two integers or strings values via reference.

Works like a charm, of course. But what if we added another overload for floats? And another for booleans. And another for class objects. This overloaded method is getting big. Now what if we needed to make a fundamental change to all of the overloads? Wouldn't it be nicer and easier to just have one method to rule them all?

Instead of two separate overloaded methods, we can trim it down to just one. The major difference is the <T> right after the method name and replacing the data type for the parameters and temp variable with T as well.

Although, we can actually omit specifying the type when calling the generic method because the compiler will infer the data type from the arguments being passed.

Classes can be generic along the same lines of thinking. A common use for a generic class is for defining collectios of items, where adding & removing are performed in the same way regardless of data type.

One common generic class is a collection called a stack, where items are pushed (added to the top of the stack) and popped (removed from the top of the stack). This is referred to as LIFO (Last In, First Out) since the item that is removed on a pop operation is teh last one that was recently added. 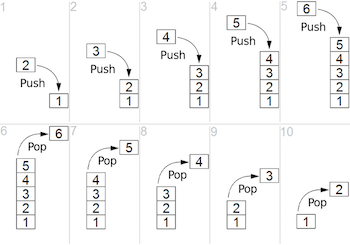 While the below example is not the Stack<> class exactly (as defined in the .Net Framework), it should show what we're talking about in regards to a use of a generic class.

Use a Generic struct (yes, structs too!) instead and it's no longer limited to integers.

We can also place a restriction on a generic to only accept a certain type, such as a struct, class or specific class/interface.

A constraint is implemented on a generic by using the where keyword followed by the generic type variable (e.g. T), a colon, and the constraint type.

There are 6 types of constraints:

Maybe the above example with the Coords struct doesn't make sense for its X & Y values to be strings. Let's add a constraint to it.

Neat! But why are we constraining with a struct? The table above shows that using a struct constraint will restrict the type argument to value types. Since strings are reference types, this should allow this struct to not accept a string. It will; however, accept a single character though. Unfortunately a generic cannot be constrained to invididual data types but this is close enough to demonstrate a constraint.

This would result in an error on line 22:

Below is a small example of using the List<> collection.

.Net has other several built-in collection classes in the System.Collections.Generic namespace, such as Queues, LinkedLists, Dictionaries, etc. The types of collections available in this namespace is fairly diverse so if one of those will provide the functionality of your needs, use them! However if it will make sense to create your own generic collection, go right ahead.

Generics are a powerful feature of C# that allows us to create more versatile data structures and methods. Using generics can provide great abstraction and extensibility, allowing for code reuse, type-safety, and performance gains. Finding where to use them can take some practice and forethought as it may not be readily apparent. No problem though! Keep the concepts in mind for refactoring opportuntities at the least.